Conventional wisdom has it that there is only sufficient space for one breeding pair of Barred Owls within Stanley Park. However, over time we have discovered that most years there are three pairs actively nesting.

No doubt the reason that the park can support so many owls comes down to food supply. Being a somewhat urban park it has a large supply of squirrels, rodents and small birds - supported, in part, by human activities (some deliberate, some not).

The division between North and West (South) is somewhat variable - based initially upon an encounter with multiple owls near the line indicated. It was clearly one family with young and probably two other adults. Naturally the border will vary from year to year. 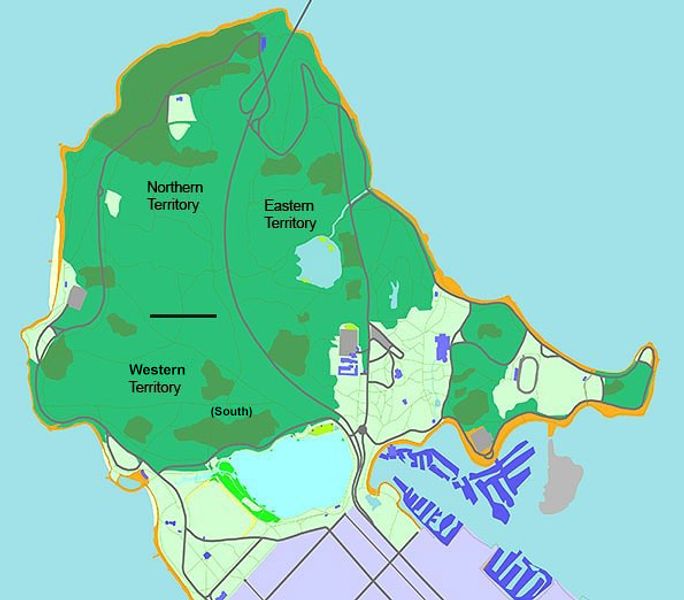 Thanks to Peter Woods (Stanley Park Explorer) for the above map.

Since this map was created the Western territory has split (briefly) into Southern and Western. However, that only lasted one year (2009). See the Statistics page for more details. Since (at least) 2018 there has been a breeding pair east of Pipeline road (through the centre of the Eastern Territory) - in the area to the east of the Aquarium. Also, the Northern Territory has not seen any young since 2010 - perhaps that territory has changed such that I missed activity. My observations beyond 2017 are much reduced and should be considered statistically insignificant.

We finally determined that there must be (at least) three pairs based upon sightings of the young. It helped that each family usually had a different number of young (1 to 3) and that there were sightings by different people at the same time (of the young). Full confirmation came for North and South in 2008 when I actually located nest sites and even saw one owlet take its first flight!

Please note that much of this information is likely out of date.